France after the victory of Shy'm with her winning song On Se Fout De Nous, being placed just with a one point lead in front of

Paris is the capital and most populous city of France. It is situated on the River Seine, in the north of the country, at the heart of the Île-de-France region. Within its administrative limits (the 20 arrondissements), the city had 2,234,105 inhabitants in 2009 while its metropolitan area is one of the largest population centres in Europe with more than 12 million inhabitants. An important settlement for more than two millennia, by the late 12th century Paris had become a walled cathedral city that was one of Europe's foremost centres of learning and the arts and the largest city in the Western world until the turn of the 18th century. Paris was the focal point for many important political events throughout its history, including the French Revolution. Today it is one of the world's leading business and cultural centres, and its influence in politics, education, entertainment, media, science, fashion and the arts all contribute to its status as one of the world's major cities. The city has one of the largest GDPs in the world, €607 billion (US$845 billion) as of 2011, and as a result of its high concentration of national and international political, cultural and scientific institutions is one of the world's leading tourist destinations. The Paris Region hosts the world headquarters of 30 of the Fortune Global 500 companies in several business districts, notably La Défense, the largest dedicated business district in Europe.  Centuries of cultural and political development have brought Paris a variety of museums, theatres, monuments and architectural styles. Many of its masterpieces such as the Louvre and the Arc de Triomphe are iconic buildings, especially its internationally recognized symbol, the Eiffel Tower. Long regarded as an international centre for the arts, works by history's most famous painters can be found in the Louvre, the Musée d'Orsay and its many other museums and galleries. Paris is a global hub of fashion and has been referred to as the "international capital of style", noted for its haute couture tailoring, its high-end boutiques, and the twice-yearly Paris Fashion Week. It is world renowned for its haute cuisine, attracting many of the world's leading chefs. Many of France's most prestigious universities and Grandes Écoles are in Paris or its suburbs, and France's major newspapers Le Monde, Le Figaro, Libération are based in the city, and Le Parisien in Saint-Ouen near Paris. Paris is home to the association football club Paris Saint-Germain FC and the rugby union club Stade Français. The 80,000-seat Stade de France, built for the 1998 FIFA World Cup, is located in Saint-Denis. Paris hosts the annual French Open Grand Slam tennis tournament on the red clay of Roland Garros. Paris played host to the 1900 and 1924 Summer Olympics, the 1938 and 1998 FIFA World Cup, and the 2007 Rugby World Cup. The city is a major rail, highway, and air-transport hub, served by the two international airports Paris-Charles de Gaulle and Paris-Orly. Opened in 1900, the city's subway system, the Paris Métro, serves 9 million passengers daily. Paris is the hub of the national road network, and is surrounded by three orbital roads: the Périphérique, the A86 motorway, and the Francilienne motorway in the outer suburbs. 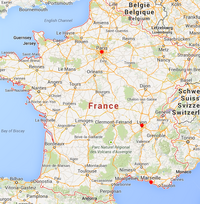 Locations of the candidate cities.

The bidding phase submissions opened on 17 February. On 20 February, Paris got the official venue of this edition.

The Semifinal draw took place on February 19 . All countries except the Big 6 got dividied into 8 pots.

Fifty-three countries will participate in the ninth edition.

Israel  confirmed their participation while

Faroe Islands withdraw from this edition.

Germany will vote in the Semifinal.

New Zealand will vote in this Semifinal.

Ten countries will qualify from each semi-final. With the big 6, they form the 26 finalists.

Retrieved from "https://international-music-festival.fandom.com/wiki/International_Music_Festival_9?oldid=6777"
Community content is available under CC-BY-SA unless otherwise noted.