Belfast is the administrative capital and largest city of Northern Ireland. Most of Belfast is in County Antrim, but parts of East and South Belfast are in County Down. It is on the flood plain of the River Lagan.

By population, Belfast is one of the largest cities in the United Kingdom and the second largest on the island of Ireland. It is the seat of the devolved government and legislative Northern Ireland Assembly. At the time of the 2011 census, the city of Belfast had a population of 286,000 and lies at the heart of the Belfast Urban area, which has a population of 483,418 and the Belfast Metropolitan Area, which had a population of 579,276 at the 2001 census. The Larger Urban Zone, as defined by the European Union, has a total population 641,638. Belfast was granted city status in 1888.

Historically, Belfast has been a centre for the Irish linen industry (earning the nickname "Linenopolis"), tobacco production, rope-making and shipbuilding: the city's main shipbuilders, Harland and Wolff, which built the well-known RMS Titanic, propelled Belfast on to the global stage in the early 20th century as the biggest and most productive shipyard in the world. Belfast played a key role in the Industrial Revolution, establishing its place as a global industrial centre until the latter half of the 20th century. Industrialisation and the inward migration it brought made Belfast, if briefly, the biggest city in Ireland at the beginning of the 20th century, and the city's industrial and economic success was cited by unionist opponents of Home Rule as a reason why Ireland should shun devolution and later why Ulster unionists in particular would fight to resist it.

Today, Belfast remains a centre for industry, as well as the arts, higher education, business, and law, and is the economic engine of Northern Ireland. The city suffered greatly during the period of conflict called "the Troubles", but latterly has undergone a sustained period of calm, free from the intense political violence of former years, and substantial economic and commercial growth. Additionally, Belfast city centre has undergone considerable expansion and regeneration in recent years, notably around Victoria Square.

Belfast is served by two airports: George Best Belfast City Airport in the city, and Belfast International Airport 15 miles (24 km) west of the city. Belfast is also a major port, with commercial and industrial docks dominating the Belfast Lough shoreline, including the famous Harland and Wolff shipyard. Belfast is a constituent city of the Dublin-Belfast corridor, which has a population of three million, or half the total population of the island of Ireland. Belfast is listed by the Globalization and World Cities Research Network (GaWC) as a global city, with a ranking of 'Gamma'. 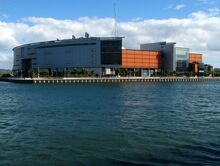 View of the Odessy Arena in Belfast

On July 4, BBC decided to hold the compeition in Belfast. Their decision was made regarding the venue, but also the location and meaning of Belfast.

The draw that determined the semi-final allocation was held on 05 July 2014. The semi-final allocation had the old format as the IBU did not decide the running order. The big 6 countries were first drawn to determine in which semi-final would each country vote. Malta, Norway and the United Kingdom  were drawn to vote in the first semi-final while Germany, Portugal and Spain were drawn to vote in the second semi-final. The rest forty-eight countries were divided into eight pots, based on their geographical place. Each time a country was drawn from the pot, its semi-final draw was determinded.

The eight pots were the following:

United Kingdom will vote in this Semifinal.

Spain will vote in this Semifinal.

Retrieved from "https://international-music-festival.fandom.com/wiki/International_Music_Festival_14?oldid=12886"
Community content is available under CC-BY-SA unless otherwise noted.